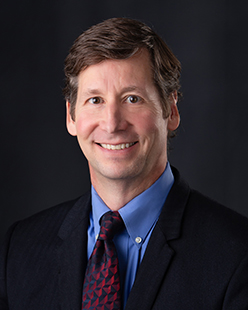 Dr. Paul Gehring moved to Tulsa in 1994 with his wife, Dr. Gena Gray. He originally practiced at an infertility clinic to pursue his interest in reproductive surgery. After three years, he missed doing all aspects of OB/GYN and joined a full-time OB/GYN practice where he held many administrative positions. He is beyond excited about starting OB/GYN Specialists of Tulsa, where he can utilize his practical knowledge to create the best possible patient experience.

He has been privileged to personally hand countless newborns to their excited parents and plans to continue pursuing new and safer approaches to GYN surgery with shorter recovery times. Dr Gehring’s additional training in gynecologic surgery >has led him to be the first in Tulsa, Oklahoma to perform many new and innovative gynecologic procedures. He is fully trained and proficient in robotic surgery.

Dr. Gehring graduated from Miami University in Oxford, Ohio in 1985. Four years later, he earned his Doctor of Medicine degree from the University of Cincinnati. He completed his residency in Obstetrics and Gynecology at one of the largest training programs in the country – Baylor College of Medicine. Following residency, he completed a fellowship in reproductive surgery at the Woman’s Hospital of Texas.

Dr. Gehring achieved his OB/GYN specialty board certification in 1996. He is currently a licensed physician through the State of Oklahoma and is a Fellow of the American College of Obstetrics and Gynecology.

Dr. Gehring encourages all of his patients to take an active role in their healthcare journey and he makes his best effort to translate challenging medical jargon into understandable language with common-sense explanations.

Paul met his wife while they were interviewing for OB/GYN residency positions. He quickly became enamored and luckily was able to see her at another interview that fall. They planned a date and he initially thought he had been stood up when he realized that she was at a restaurant across the street. They had their date and he married Gena in 1990, during residency. They have four children together. He is very thankful for the practice of OB/GYN, because it has given him a profession as well as a wife and family.

Through his wife’s pregnancies and deliveries, he felt the joys and fears of the pregnancy journey. During one pregnancy, his wife had a false positive test and he always remembers how that made them feel when he considers and interprets tests for his patients.

Paul has two children who still live at home and he enjoys being involved in their activities. He has been particularly active in Boy Scouts, including hiking trips throughout the country. He has two children in college and is proud of the young adults that they have become. He also likes listening to music and playing guitar. He is active in water and snow sports although his middle age has now made him a safer participant of both.

Dr. Gehring completed his residency in 1993 at one of the largest programs in the country, Baylor College of Medicine in Houston Texas. Following residency he did a yearlong fellowship at the Woman’s Hospital of Texas in pelvic surgery to advance his skills in complicated gynecologic surgery. This training included microsurgical, advanced laparoscopic, pelvic organ prolapse and incontinence, severe endometriosis, severe pelvic adhesions, infertility, among others. With this additional training he has been advancing gynecologic surgery in Oklahoma for over 20 years. Dr. Gehring is one of the only Drs. in this part of the country doing robotic abdominal cerclage.

Pregnancy loss at any stage of pregnancy is one of the most difficult experiences women face. The further into pregnancy this occurs the more devastating it becomes. Incompetent cervix leads to pregnancy loss typically in the 18-28 week range. This is typically treated during pregnancy with a procedure in which the cervix (the opening to the uterus) is vaginally sewn shut. In some women this also fails and they experience this devastating loss again. Some have this happen multiple times in their attempt to have a family. These most difficult cases are the ones Dr. Gehring treats with robotic abdominal cerclage. Abdominal cerclage is very successful in treating incompetent cervix. These procedures are typically performed as an open surgery with a 2 night hospital stay and 4-6 weeks of recovery. With the robotic approach it is done as an outpatient with recovery over a weekend. Robotic abdominal cerclage is usually performed when the patient has not yet achieved another pregnancy and can be used for multiple pregnancies. Patients following abdominal cerclage are delivered by cesarean section.

At your appointment Dr. Gehring will do a complete history physical exam to determine your candidacy for this procedure. Records of previous pregnancies are welcome and helpful in determining your most appropriate treatment course. Out of town patients can request a nurse consult and forward their records to determine their candidacy for Robotic Abdominal Cerclage.

Dr. Gehring completed his residency in 1993 at one of the largest programs in the country, Baylor College of Medicine in Houston Texas. Following residency he did a yearlong fellowship at the Woman’s Hospital of Texas in pelvic surgery to advance his skills in complicated gynecologic surgery. This training included microsurgical, advanced laparoscopic, pelvic organ prolapse and incontinence, severe endometriosis, severe pelvic adhesions, infertility surgery, among others. With this additional training he has been advancing gynecologic surgery in Oklahoma for over 20 years. He has been doing tubal ligation reversal since his arrival in Tulsa. These procedures were initially done as an open microsurgical procedure. He then advanced to laparoscopic repairs and now does them robotically. The advantage of the robotic approach is this is an outpatient procedure with recovery very similar to the tubal ligation. Typically over a weekend if desired. Since this procedure is not a covered insurance benefit Dr. Gehring has partnered with Oklahoma Surgical Hospital where he is able to bring this advanced procedure to patients at prices comparable to the older open procedures. Approximate total cost for this procedure is $7,250.00.

All types of tubal ligations can be reversed including tubal coagulation (bipolar or monopolar), ligation and resection (Parkland, Irving, Pomeroy, or Uchida), rings (Falope or Yoon), and clips (Filshie or Hulka). Success rates of reversal vary for the type of tubal ligation performed as well as the post reversal tubal length. Overall success rates range from 60-80%.

Dr. Gehring’s goal in your care is not just to reverse your tubal ligation but for you to deliver a healthy baby. At your office appointment Dr. Gehring will review your complete history and review any medical records (a copy of your tubal ligation operative report can help establish the type of tubal ligation you had and predict success rates of reversal). Preoperative semen analyses and when indicated establishing the woman’s ovarian reserve are recommended. Out of town patients can request a nurse consult and forward their records to determine their candidacy for tubal ligation reversal.